It is similar in the animal world as well as in the human world. Sorrow always surrounds those who lose a loved one.

A cow spotted by Benjamin Tipps in Texas lost her calf.

Benjamin didn’t think long before he decided to help her as much as he could.

This all happened during his visit to his mother on Mother’s Day.

A Texas man laid down next to this cow on Mother's Day to console her after losing her calf. >https://t.co/DMH6fpdlHF pic.twitter.com/R2wGEnSJHu

This big-hearted man approached the cow and lay down next to her.

It was not difficult for him to spend time with her. At the same time, he provided her with all possible support for everything she was going through.

She lost her calf after a difficult birth. Then she lay down on the ground enveloped in grief.

Nevertheless, Benjamin was by her side in the most difficult moments of her life. 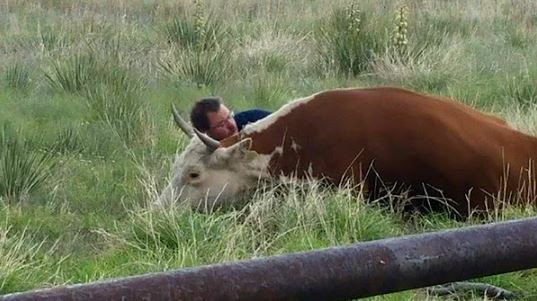 When these scenes hit social media, people were mesmerized by Benjamin’s kindness.